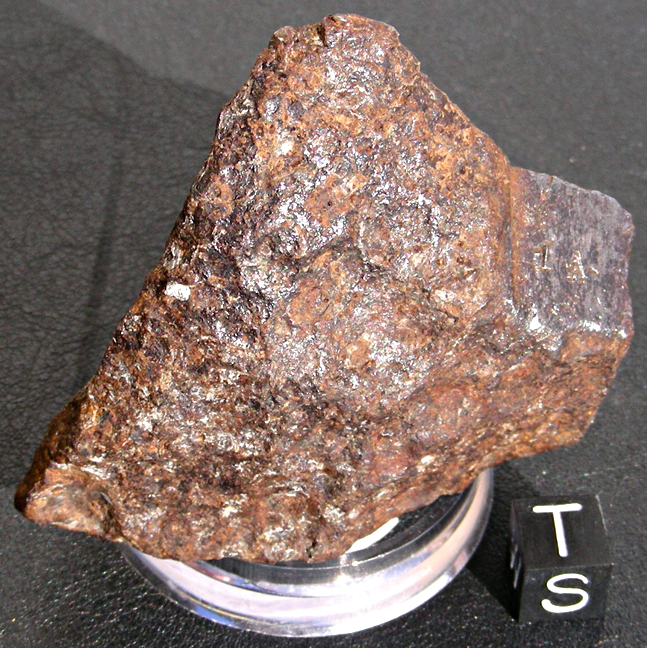 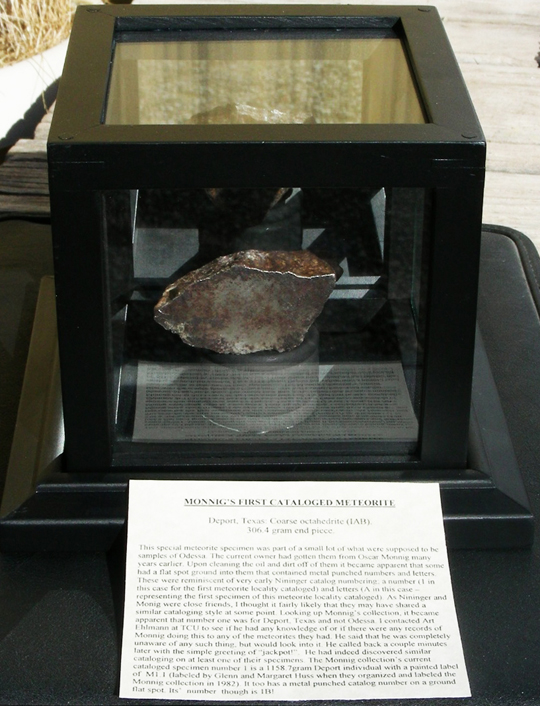 Bottom cut face of End Piece
Due to the historical significance of this piece, the cut face
has been left as is without refinishing.

Close up of Monnig specimen cataloging # stamped into specimen

This special meteorite specimen was part of a small lot of what were supposed to be samples of Odessa. The current owner had gotten them from Oscar Monnig many years earlier. Upon cleaning the oil and dirt off of them it became apparent that some had a flat spot ground into them that contained metal punched numbers and letters. These were reminiscent of very early Nininger catalog numbering; a number (1 in this case for the first meteorite locality cataloged) and letters (A in this case – representing the first specimen of this meteorite locality cataloged).

As Nininger and Monig were close friends, I thought it fairly likely that they may have shared a similar cataloging style at some point. Looking up Monnig’s collection, it became apparent that number one was for Deport, Texas and not Odessa.

I contacted Art Ehlmann at TCU to see if he had any knowledge of or if there were any records of Monnig doing this to any of the meteorites they had. He said that he was completely unaware of any such thing, but would look into it. He called back a couple minutes later with the simple greeting of “jackpot!”. He had indeed discovered similar cataloging on at least one of their specimens. The Monnig collection’s current cataloged specimen number 1 is a 1,158.7gram Deport individual with a painted label of M1.1 (labeled by Glenn and Margaret Huss when they organized and labeled the Monnig collection in 1982).

It too has a metal punched catalog number on a ground flat spot.

Its’ number though is 1B!