Center: Rev. of Elagabalas coin with Cart of Astarte in center surrounded by the Zodiac
In the collection of Michael Blood. EXCEPTIONALY RARE - NFS


Under construction. Coins will be available for sale. Done before 8-20-19 Refresh on each visit

The Greeks and Romans worshiped many different stones.
Many were considered sacred because they were thought to be meteorites.
Many were considered meteorites because they were believed to be sacred.
Many different coins were minted under different rulers. Most have
the ruler on the Obverse of the coin and a sacred stone on the Reverse.
Sometimes the stone is in a temple, other times in a chariot or cart and
other times on its own. They appear among the Greeks, the Roman Provinces
and the Roman Imperial coinages. Following is an overview explaining the
background of some of these stones. Such stones are even referred to in the
Old Testament: For instance, in Acts:19-35:

"And when the townclerk had appeased the people, he said,
'Ye men of Ephesus, what man is there that knoweth not
how that the city of the Ephesians is a worshipper of the great
goddess Diana, and of the image which fell down from Jupiter?' ”

It is clear from the descriptions and histories of these stones that they were
considered meteorites. Here are some of those you will find depicted on the
Reverse of a variety of Greek and Roman coins:

The Baetyl was considered the house of god – the place where the soul of the god resided.
These stones were literally worshiped. The term, baetyl, appears the first time in writing for
by the author Pliny the Elder (ad 23 – 79). However, it is believed the term existed long before
that time. This term, Baetyl, refers not so much to one stone, but is rather a concept applying
to all the stones appearing on these ancient coins, each in their own right. In almost all instances the
soul of the god was considered to be literally embodied in the stone, itself. Therefore, the Stone of
Emesa, Omphalos, Elah-Gabal, Stone of Paphos, etc. are al Baetyl in their own right.


The Stone of Pathos

In This stone is almost always depicted as in the Temple of Aphrodite at Pathos.
It appears on re Reverse of a variety of coins in the temple of Aphrodite just
south of Paphos on the isle of Cyprus. This stone, worshiped as a meteorite and
the actual embodiment of Aphrodite (Known to the Romans as Venus) dates back to
prior to 1,500 B.C. In this instance, though the surface is dark and blackened, it has
been determined not due to being meteoritic fusion crust, but due, instead to being a
terrestrial stone smeared with scented oils, honey, milk and other offerings throughout the ages.

The mythology of this stone involves the origin of the Greek gods.
Greek myths explains the Omphalos best: Most people consider Zeus to be the major god of Greece.
(Later, in Rome, referred to as Jupiter). This is because his father, a Titan named Cronos ate his children
upon their| birth,due to the fact his mother had prophesized that he would be overthrown by his own
children. However, at the time of the birth of the sixth child, the mother of Zeus, Rhea, hid Zeus in a cave on
the isle of Crete and presented Cronos with a swaddling covered stone, which he swallowed whole, believing it
to be his son, Zeus. When Zeus grew up he managed to get Cronos to swallow an emetic, causing him to
regurgitate the stone and all of Zeus’ siblings(who would later populate Mount Olympus as gods). Zeus
and his brothers and sisters defeated the Titans and Zeus achieved his stature of “King of the gods.”
Later, Zeus sent two eagles out from opposite ends of the earth, telling them to meet at its center.
They met at Delphi. There Zeus placed the stone his father had swallowed in his stead, declaring it the
Omphalos Stone (omphalos meaning navel – the navel of the earth). Additionally, at a later date it was
said that Apollo slayed the great serpent, Python in order to establish his oracular temple at Delphi, thus
allowing humans to communicate with the gods.
This myth is reflected on some coins with the Omphalos in the coils of Python (from whence the modern
python gets its name). At the temple, the stone was revered and was the very seat upon which the oracle sat,
breathing the fumes which imparted a psychedelic effect upon the priestesses who then gave their prophetic
pronouncements. Sometimes the Omphalos is portrayed covered with what is commonly
referred to as a fishing net. (others consider it an attempt to resemble a pine cone,
but this author does not agree with the pine cone theory).

Elagabal (aka Elah-Gabal aka The Stone of Emesa)

The Sacred Stone of Elagabal (Elah-Gabal) was worshiped as a god in Roman Syria.
This large black rock, believed to be a meteorite, was also known as The Stone of Emesa,
it was, none the less, considered to be the god, Elagabal. Emesa rose to prominence under the |
Emperor Anoninus Pius (AD 138-161) who issued coins featuring The Stone of Emesa.
The cult of Elagabal was not fully introduced to Rome until the Emperor, Marcus Aurelius Antoninus
Augustus (AD 218-222) transferred the stone to Rome with great pomp and circumstance and declared
himself to be “Elagabalus” named after the god/stone. The worship of the stone always had involved music,
song and dancing, and Elagabalus was a hard core “party animal.”He declared himself high priest of
Elagabal, which he paraded in a chariot through Rome in a spectacle and is depicted on many of his coins.
On many coins the stone is often depicted with an eagle atop, spreading its wings. Elagabal was also known in
Rome as “Sol Invictus” (the invincible Sun). Sol Invictus eventually became a major Roman god
in the fourth century and it is no coincidence that his birthday was December 25th.

The Sacred Stone of Zeus Kasios
aka The Baetyl of SidonZeus

Kasios was the patron god of Pieria since it came into existence. Bothe Trajan and Hadrian stopped at
the important naval station for Antioch and visited the shrine to Zeus Kasios on Mount Casius
to pray for victory in the coming campaign and coins were struck just before the Parthian War.

Some of the coins from Caesarea in Cappadocia show what appears to be a pyramidical baetyl.

The meteoritic source of the ancile shiled involves a plague in Rome during the reign of
Numa Pompilius, the first king of Rome. The citizens rushed to the temple of Mars crying
out for his beneficence. As the prayed an Ancile (Shiled) fell from the heavens and a voce
proclaimed that as long as the ancile was preserved Rome would endure. That day, the plague ended.
The ancile was placed in a temple and 11 copies were made by Mamurius Veturius to confuse
everyone who would try to steal it. The only ones who could tell the original from the copies
were the 12 Salii, the priests who were charged with guarding the ancile. The original ancile is
now thought to be one of the unusual sheild shaped oriented nickel-iron meteorites that are
broad and flat. (the plural is ancilia. An Ancile is a shield worn on the elbow for both defense
and offense in hand-to-hand combat situations.) 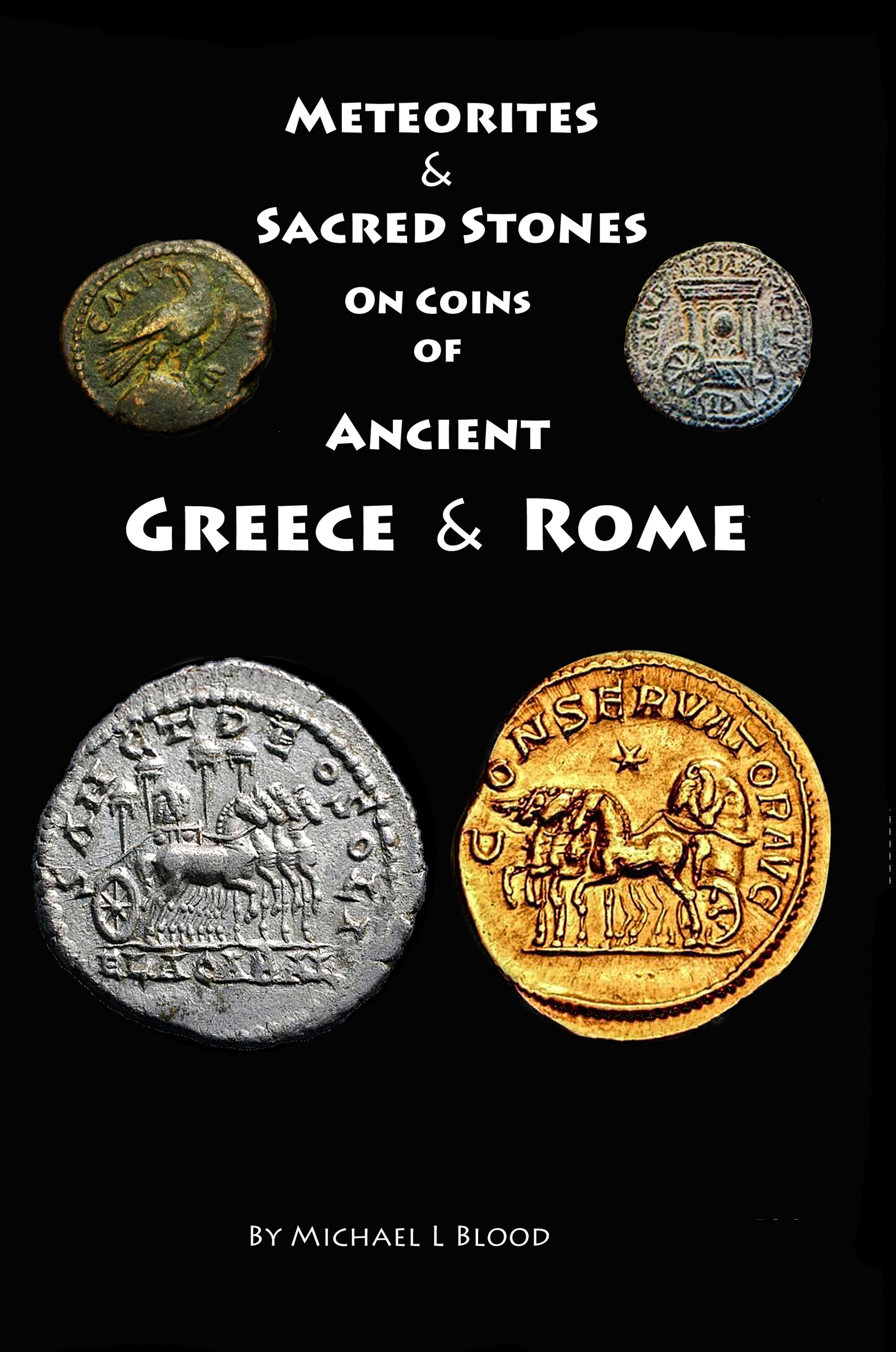 Available in Kindle and in Printed form at: https://www.amazon.com/dp/B07VJK6G97